One notices immediately the quality of the meal served on the airlines in India. Even though some no-frills airline now fly the friendly Indian skies, most, like Jet Airways still believe in pampering its guests. A tasty, hot meal was served complete with beverage service, cold towels to refresh the summer traveller and magazines to while away the time. From Delhi, I arrived at a totally renovated Bagdogra airport. This is the closest airport to Darjeeling, still a military airport, closely monitored, with Indian air force carriers and helicopters parked nearby. Nothing of the dilapidated airport from my schooldays or even a few years ago remained. Now it was gleaming mosaic, large visitors' areas, automated bag 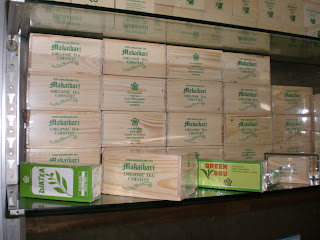 gage carousels and a bustling 140-seat restaurant. I knew I was in the right place when I saw the airport Makaibari tea shop carrying packets and chestlets of pure Makaibari tea. My sister, Srirupa, supervises the domestic packeting and distribution and the Darjeeling airport is one of the most successful outlets. All air travellers with Darjeeling as their destination must arrive at Bagdogra Airport. An hour's journey takes you to Makaibari tea estate. Starting at sea level, driving past the vast acres of upper and lower Longview Estate, the cars make their way up 4000 feet in 20 minutes, a journey not for the faint hearted. Recently converted to one-way traffic, it still allows those who must ply this road to drive in the opposite direction, thus creating a ride at once awesome and death-defying. Only the initiated can drive on this road, overlooking breathtaking views of tea estates, forests, steep hills and foliage of every type imaginable. I could breathe the mountain air as I entered Makaibari.