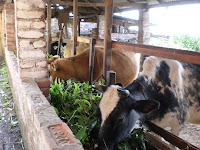 A dairy is an integral part of organic farming. Let's begin with my sister Srirupa's dairy, the official "Makaibari" dairy. My sister has been maintaining this for several decades and has it down to a science. She keeps 4 adult cows at any given time with their calves. The oldest cow is sold as are the bulls, thus maintaining a rotation. The cows provide milk which is used at the estate house with the surplus being sold at the local market.

Milk is enjoyed as is and made into delicious Indian sweets and home-made yoghurt. Two full-time people care for the cows along with part-timers, under the supervision of a long-timer, Tej Bahadur. Cows are provided fresh grass and feed. Their waste is used for the compost.

Dilip Bhujel serves as the local milkman for the Makaibari dairy. Dilip has been working at the Makaibari house for over 14 years and has a wife and 2 children, Darpan and Diksha, pretty good students I hear! His wife, Manju, manages one of the child care creches at Makaibari. Dilip is an excellent employee who puts great care into his work. Although not an official cook, he told me he enjoys cooking food, growing flowers and watching Channel Nepal on TV! He volunteered to be the milkman and comes each morning, collects the milk and sells it to 10 - 15 regular customers in Kurseong village. He gets a nice cut of the proceeds and it's a great example of how interconnected life is at Makaibari.

Enjoy these images of the dairy and Dilip. 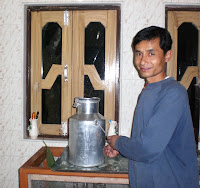 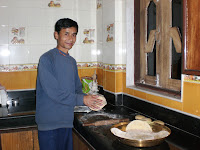