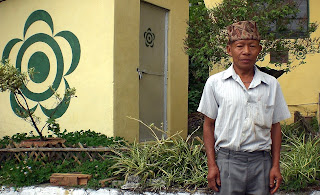 Makaibari has 1000 acres of forest, 2 acres of trees to 1 acre of tea. They teem with wild life, 300 species of birds and a diversity of trees that takes your breath away. All of this is by design. And to ensure it continues, 13 Forest Rangers keep the faith.

I was told that they met every Monday at 7.30 am. I got up early and ran down the 90 steps from the Makaibari house to the factory determined not to miss this elusive group. They came from the far corners of each of the seven villages and could disappear again into the wilderness for all I knew. I asked them what their chief responsibility was. "Protect wildlife" they said. They also ensured that trees were not cut indiscriminately and accompanied visitors on treks, as required. They worked individually or in groups, particularly near Makaibari's borders where outsiders may attempt to cut Makaibari's protected forests.

The Rangers were selected for their dedication and skill. The oldest, Budhival Rai, pictured here, had been a ranger for 36 years and came from Thapathully village and in his many years, his encounter with 2 jungle buffaloes with enormous horns was his most memorable. He was also one of those most fortunate to see the Indian Pied Hornbill, king of birds, and peacocks.

Himal Rai most enjoyed noticing the numerous species of birds. Manvir remembered his sudden and very scary meeting with an enormous snake. Hari Chettry (whose wife Mayadevi was one of the women supervisors) had seen a small leopard. Indra Kamal recalled an incident 13 years ago as clearly as if it was yesterday, of a tiger mother with her cub which stopped him dead in his tracks. Norbahadur Subba had seen jungle goats, deer, wild boar and even a Royal Bengal Tiger.

I was so impressed with this group of 13 - Hum Tera - as they are called (We, the 13) for their quiet, simple strength and the enormity of the job they do. And I was so proud of Makaibari for giving them the respect they deserved. Here, in roll call are the 13 Rangers: Suresh Rai, Lime Bahadur, Robin Khawas, Nor Bahadur, Indrakamal, Chandan, Budhival Rai (36 years), Hari Chettry (22 years), Surjaman (7 years), Jiban, Manbir, Sunil & Himal Rai (13 years).
Recent Articles
Tea - Good for Allergies as Well!
If you're someone who sneezes through the Spring, suffers from runny eyes and the sniffles, you know how miserable this season...
It's Spring Cleaning Time!
Longer days, more light – that means it’s time to brush away those cobwebs, de-clutter and clean up.  Not only...
3 Rules to Storing Tea
Tea is a hardy item.  It keeps well. Nevertheless, you have to follow some simple rules in maintaining its flavor...
And the Contest Winners Are....
As promised, we selected 3 Contest winners at random today.  These were the results of our mid-February "Love is Still in...
TAGS